It has been known for quite some time that Microsoft was starting to utilize some aspects of Google's Chrome to help bolster its own newest Edge browser. What we're seeing now appears to indicate that this course of action may well be perceived by Microsoft as being successful. The Edge browser had a rough beginning, not enabling addons which other browsers did and really scaring people away from it. The symptoms which had plagued Microsoft's Edge browser have, for the most part, been resolved or at least mitigated and making Chromium Edge available to Windows 7 and Windows 8 users is an interesting move by Microsoft. Perhaps the idea is to let people have a little taste of what would be in store when moving to Windows 10 or just "showing off" the way Chromium Edge looks and feels.

Microsoft's Edge browser has essentially evolved into Microsoft's Chromium Edge browser and allowing users of the older OS(s) known as Windows 7 and Windows 8 could help boost Microsoft's newest browser's market share which is currently in third place (along with IE) to Chrome and Safari. It is important to note that Microsoft's Chromium Edge browser is being made available for testing purposes initially in Windows 7 and Windows 8 and will be getting regular updates as it moves forward. This is how Microsoft's Operating Systems have always operated initially, looking for those who want to try something new while it is in development and working out bugs along the way. What's interesting with Chromium Edge is that much like the Windows 10 OS updating can be done at different frequencies chosen by the Windows user with three different "channels" to choose from. 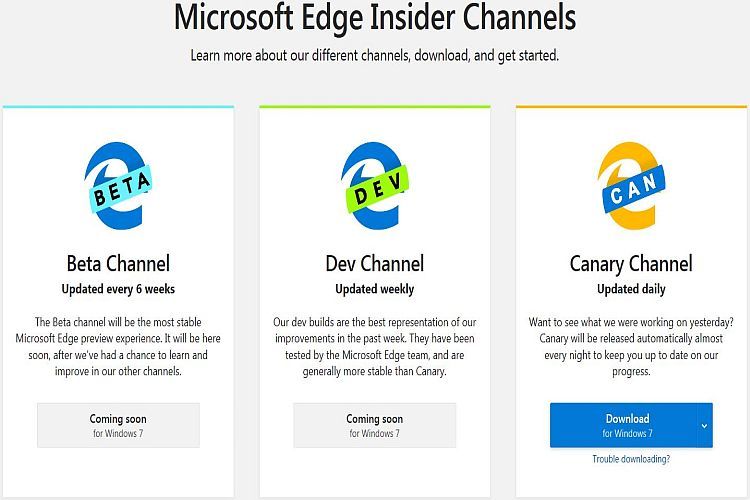 It appears from the Microsoft Edge Team blog on June 19, 2019 that the Chromium Edge Canary channel, which is the one most often updated, is available to Windows 7, Windows 8 and Windows 8.1 platforms as well as Mac OS and Windows 10 (shown when the dropdown is used). Scrolling down on that page (the first link below) you can also find you can sign up to be notified when your device's version will be available and that it's being made available on mobile devices with download links for Android and iOS, including a QR Code you could scan using your smartphone. It does seem that the Beta and Dev channels - six week and weekly frequency respectively - are to be released for Windows 7 only at first and that is very interesting in that Windows 7 only has only has about 28 weeks to live. Microsoft wants Edge to live and be more successful so they are trying to get it into more hands sooner than later. Chromium Edge does look cool but it lacks things found in the Windows 10 Edge environment and there is no Dark Theme at this point. Still, if you want to try something different, why not give it a try. It can always be uninstalled and picked up when you (probably) go to Windows 10 anyway! Check out the links below to the download site, the official blog, and a report from The Verge on Chromium Edge.

We have 1043 guests and no members online