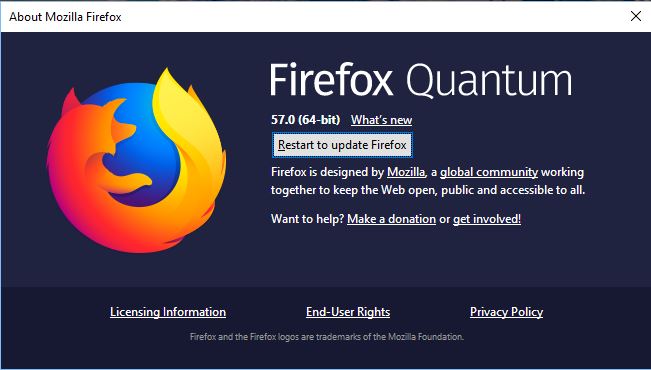 Mozilla is hardly new to the Internet, in fact their roots go back to Netscape in 1998 and they have a massive community of developers who have contributed to the success of Firefox for many years. The newest version of Firefox, dubbed "Quantum", introduces some new characteristics and functionality which keeps Mozilla's browser in competition with Google's Chrome and likely keeps it ahead of Internet Explorer. Firefox Quantum represents years of research and development on the part of Mozilla and it's contributors, and as a non-profit organization, Mozilla shows it can hold its own up against huge for-profit corporations as in Google and Microsoft. Now let's take a look at what makes Firefox Quantum an improved Internet browser and just how Mozilla makes a leap forward with Firefox Quantum browser.

Some New Features Included With The Firefox Quantum Browser

The recent improvements to Firefox demonstrate that Mozilla aims to keep up with Google and Firefox Quantum definitely is an improved Internet browser. Mozilla touts one of the recent improvements to Firefox to be that it is "twice as fast" as it had previously been and in using it all I can say is it's faster. Mozilla has also implemented some new features including the New Tab Page which displays graphic links to pages you've visited and other popular websites. Chrome had done the same so Mozilla wisely followed suit and it is worthy to note that Firefox Quantum now has Google set as the default search provider in the US and Canada. Also introduced is an improved Page Actions drop down menu for easy access to sending links (and tabs to a device), bookmarking the current page or saving it to Pocket, and even taking a screenshot. Another improvement is having changed the address bar to what is being called the Firefox Quantum Awesome Bar. What that means is when you type in what was known as the address bar you'll find pertinent URLs and search results displayed together for you to choose from.

The Firefox Quantum Awesome Bar, the new Page Actions drop down menu and the New Tab Page, along with the increased speed and other recent improvements to Firefox Quantum combine to make an improved Internet browser which many people will find a very good choice. To find out more about Quantum and the many changes and improvements made to the Firefox browser check out the two links below which are extremely informative. No matter which Internet browser you choose, Mozilla has made Firefox a serious competitor and Quantum is an excellent Internet browser!

We have 1054 guests and no members online