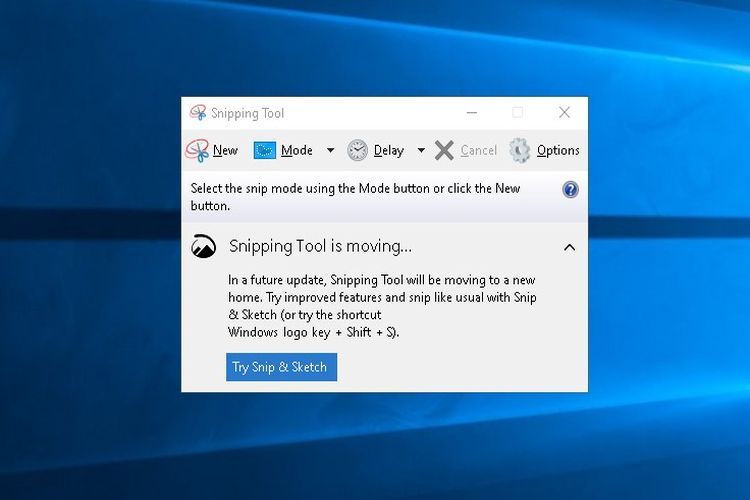 The Windows Sipping Tool was made famous in Windows 7 and many people use it often and even if not all too often it still comes in handy at times. Although the Windows Sipping Tool does allow for some editing using a pen, highlighter, and eraser it doesn't have anything like the functionality of most graphics editing programs. If you want to really do more with an image you snipped with the Windows Sipping Tool you'd likely do what I have done many times which is paste that snip into another program such as Paint or IrfanView. Windows 10 Snip & Sketch adds the touch writing option, expands on other writing options, and adds cropping. Snip & Sketch does have a key combo for quick access which is Windows Logo Key + SHIFT + S. The improvements with Snip & Sketch over the Snipping Tool may not be momentous but there is more functionality and it might be considered a nifty little addition to the Windows 10 computing environment. Below you'll find depictions of how Snip&Sketch tools work and maybe you'll see that they can be made useful.

Windows 10 is aiming to always improve nonetheless nothing is perfect and Windows 10 is no exception. Windows 10 Snip & Sketch does bring some improvements however, as of Windows 10 build 18356 there is no option to edit the snip by adding a text box in an embedded window or other means. That was done here in the first snip (Snip & Sketch Tools) using another program, in this case IrfanView. Essentially and at this point in Windows 10 development the only text Snip & Sketch will produce on its own is sketched text using the pen, pencil, highlighter and touch writing. This is why Windows 10 Insiders have a Feedback Hub and I will use it once again suggesting that possibility. Microsoft may well wish to keep it as "Sketch Only" but everything Windows 10 is a work in progress so we shall see. Meanwhile there are changes to the Snipping Tool so see the slideshow above and if you think it might be an improvement.

The pen, pencil and other tools have a drop-down menu which opens the settings for color and thickness of the sketching tool. Color can be chosen by selecting the corresponding circle and thickness by adjusting the slider as shown. These options are not much different than the Snipping Tool but there are more things to consider. Although Windows 7 does support touch screens the Snipping Tool does not have touch functionality and the Windows 10 Snip & Sketch app does support touch writing. This is depicted in the slideshow and the ability to crop is also new and shown above. There is one thing which is notably missing with the transition to Snip & Sketch from the Snipping Tool and that is an option that had been available but is not at this time. The Snipping Tool in Windows 7 did allow the inclusion of a URL when HTML is used but Snip & Sketch does not (at this time in Windows 10 build 18356). The take is this: Windows 10 Snip & Sketch does present some improvements but as so many other things about Windows 10 it still needs work. One should be able to include a URL in any image they might create and share (yes there is a share button in Snip & Sketch).

If I had to guess I would say that Snip & Sketch will see more functionality added as I have seen some of the feedback already provided to Microsoft from other Windows Insiders. This is an app which is essentially for doodling but it could be much more than that with just a few additions. Microsoft would benefit from such an improved tool as much as Windows 10 users because it would be an indicator of their commitment to their customers. You can do more with Snip & Sketch than with the Snipping Tool but just a little improvement might go a long way. Give it a try, see what you think, and if you can, please do send feedback to Microsoft.